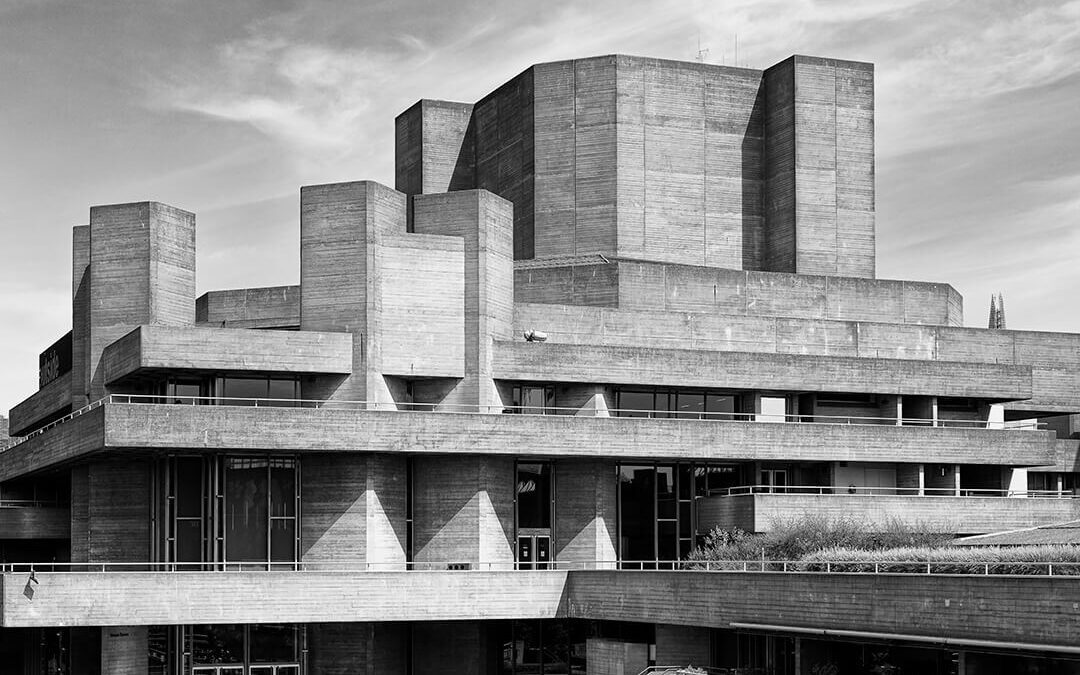 As a professional photographer I need to develop my creative skills in order to progress my art. Setting myself personal projects helps me to achieve this aim. A great area of interest for me is architectural photography and a project centred around brutalist architecture fulfils that need.

For me it is a very suitable project as many examples of this type of architecture can be found reasonably close to home. A trip along the South Bank and onwards though the City of London can be achieved in one session.

The style known as brutalist originated during the 1940’s in France, although it did not make an appearance in the UK until the 1950’s. The first proposal for utilising the style was a house in Soho which was never built. The plan was put forward as a property with warehouse aesthetic of bare concrete and wood.

During the 1960’s the style developed with the predominant use of ‘Breton Brut’ or raw concrete. Patterns were created on the concrete giving the impression of wooden shuttering. Scale was important with the emphasis on mass. Large concrete slabs were employed with textured surfaces. Service ducts and ventilation towers were very much in evidence.

The style suited austere times as the materials were cheap, and blocks could be prefabricated. Construction time was minimised which was important as there was a great need for fast reconstruction after the war.

The style was particularly popular in London where there are many fine examples such as the National Theatre and other buildings on the South Bank. These were built on or near the site of the 1951 Festival of Britain which showcased recovery of UK following WW2. The Royal Festival Hall is the only building to survive from the Festival of Britain.

Another fine example is the Barbican Centre built in the City of London. The centre was built in an area that was heavily bombed in WW2. The centre comprises around 2000 flats, a lake and garden. It also houses the Guildhall school of music and drama, a library, a girl’s school and the world-famous Barbican concert hall home to the London Symphony orchestra.

Logistics of the shoot

The beauty of working in a city such as London is that it is easily accessible and can be worked by foot in a relatively compact area.

A return trip into Waterloo and a brisk walk along the South Bank and through to the City of London across the millennium bridge opposite the Tate Modern covered the ground.

The shoot took place on a very sunny day which is very conducive for black and white photography although some of the shots were very contrasty and challenged the ability of a DSLR camera.

All the images were taken on a DSLR camera in raw mode and initially processed in Adobe Lightroom as black and white versions. The tonality was adjusted using the black and white mixer sliders.

The photos were then exported to Photoshop as colour versions and converted to black and white using the DXO Silver Effects Pro plug in. This is perhaps the best piece of software to produce excellent black and white images.

You have the option to mimic some of the classic black and white films of old. You can add texture to the image and use their excellent U point technology for local adjustments.

Observation is part of the creative process.

Of course, thinking in black and white is quite different to thinking in colour. You need to think about shape, form and texture within the image.

Observation is a very important creative process and here I find the juxtaposition of the concrete stairwell and metal fire escape interesting. They complement each other by introducing a similar curve into the composition. There is also added interest as they are constructed of different materials.

How can you be creative.

My inspiration for this shoot came from knowing that some photographic tuition providers advertise this as a day’s training. I thought that I would just go out and do it.

The secret is that there is no secret, and you just need to find something that interests you and plan the shoot. Then just pencil in a day and carry it out. It can be very rewarding, and you can share the results on Instagram or other social media platforms. 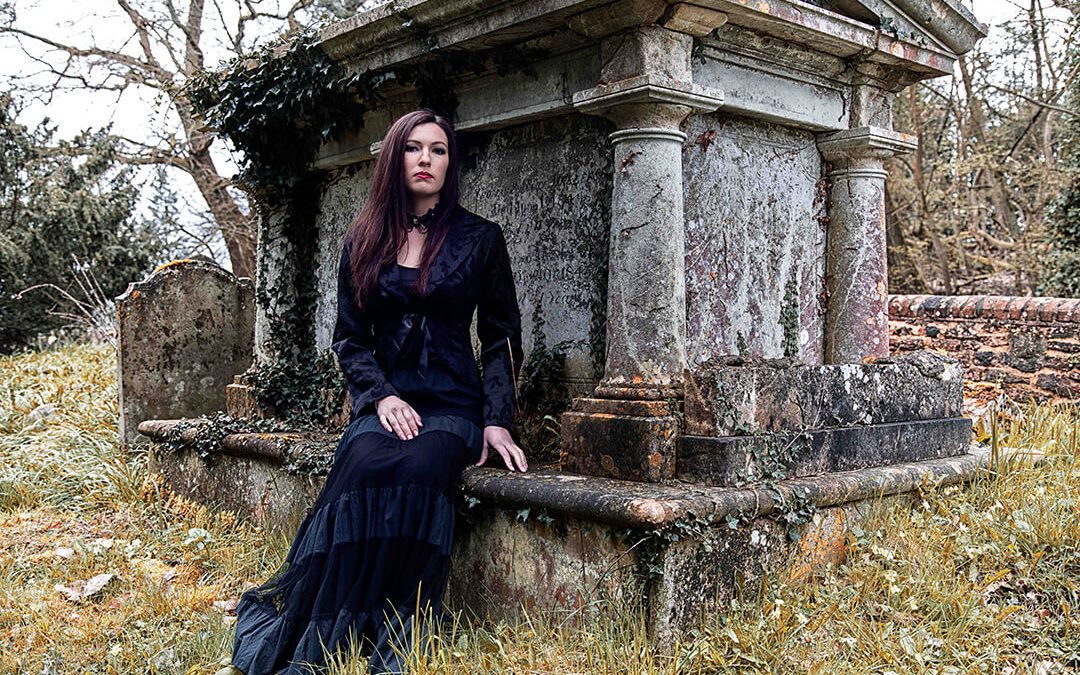 The creative Gothic-styled shoot idea came about from a chance meeting in the most unusual of circumstances. You would not normally expect such an encounter from the dull atmosphere of a local business exhibition. It is true though! I met Victoria whilst exhibiting at ‘Woking means Business’. I had been thinking of a new creative project and this was a dream come true.

Background to the shoot

Victoria was introduced as someone who was just starting out in business. She was looking for advice on local networking opportunities. Of course, my eyes lit up when I asked Victoria what business she was starting and she replied that she was a personal stylist. This was just the person I needed to enhance the team of creatives I was building. I swiftly introduced her to one of my networking groups, which she promptly joined.

A meeting was arranged where we could discuss collaboration. It was an interesting meeting where we found we had lots of mutual interests. This is where Victoria revealed that she was a goth in a former life. I then introduced the idea of the creative gothic-styled shoot to which she replied, “Yes, a million times Yes!!”.

Preparation for the shoot

The wheels were set in motion and Victoria was introduced to my model Lora and make up artist, another Viktoria.

The next step was to create a Pinterest board where we could share ideas. This provided a basis for our plans and was somewhere where everybody could reference progress. Lots of ideas soon appeared relating to styles, fashion and make up.

Meanwhile Victoria busied herself sourcing suitable fashion and accessories from various outlets. It was helpful that she would probably want to wear the items after the shoot and it was also fortuitous that Victoria and Lora were of a similar build. This was the start of building a dream team for the shoot. Ideas for locations were also discussed and it was agreed that we would shoot at Waverley Abbey (ruined Cistercian Abbey) and the military church in Deepcut (of ‘Kingsman’ Fame.

The day of the shoot arrived and Victoria picked me up from home as we were travelling down to Hambledon in one car. The boot was packed with clothing and accessories and on the way down Victoria excitedly described all of the looks that she had created. Some concern about the suitability of the church were raised. We had found that there was a service at 10:30 and felt that it might be somewhat inappropriate that we were conducting a photo-shoot.

By the time we arrived at Viktoria’s house Lora was already there and the make up had started. Whilst this was going on Victoria unpacked the car and began to lay out the fashion for the shoot. Further discussion took place about locations. Then Viktoria’s husband had a stroke of genius. “Why don’t you try the church in the village, that has a decent graveyard.” So we had a plan.

The make-up took around an hour and we were then ready to try the first look. This was a traditional Victorian dress complete with choker which we thought that it would be very suitable for the shots in the graveyard.

How amazing was the graveyard!! It was absolutely perfect for the style that we had created. We immediately found a chest tomb covered in ivy and featuring weathered stone. The first shot in the bag was awesome.

We then found a cross which Lora instinctively wrapped herself around. She then moved and I said “No, do that again”. I then took the shot with thoughts in my mind of “It looks like the crucifixion”

We then found another equally weathered and rustic headstone. Lora leaned against this, and I asked her to place a hand against the stone, to look distant and forlorn. I named this shot as a love lost. It was very poignant. We then found a hollow in the trunk of a yew tree which Lora squeezed into. A few shots were taken but they did not really work out. It was at this point that people started to appear from within the church, so we decided it was time to move on.

The next stop for our gothic-styled shoot was Waverley Abbey. Here we continued with the Victorian outfit for a few shots, before Lora changed into a more modern Goth style dress.

I then started to introduce gels over my flash to try to produce some bizarre effects. The aim was to use an orange gel on the flash with the camera set to a tungsten white balance.

This would mean that Lora would look quite normal, however, the background would turn rather blue. We then looked around us and found something that was rather disturbing.

What we thought was a bundle of sheep’s wool turned out to be human hair. We also found the remains of some burned down church candles too.

What strange events had occurred here? Anyway, not being one to let an opportunity pass me by, I utilised the old candles with a view to creating something special later.

The next costume change was something a little funkier. Victoria had sourced a dress that was somewhat brighter with coloured lightning bolts on it. We took some shots with the candle before moving into the middle of the cloisters. Here Lora spread her arms out and looked up towards the heavens as if seeking some sort of divine intervention.

In conclusion, all parties involved felt that the creative gothic-styled shoot was a great success providing everyone with plenty of images for their social media campaigns.