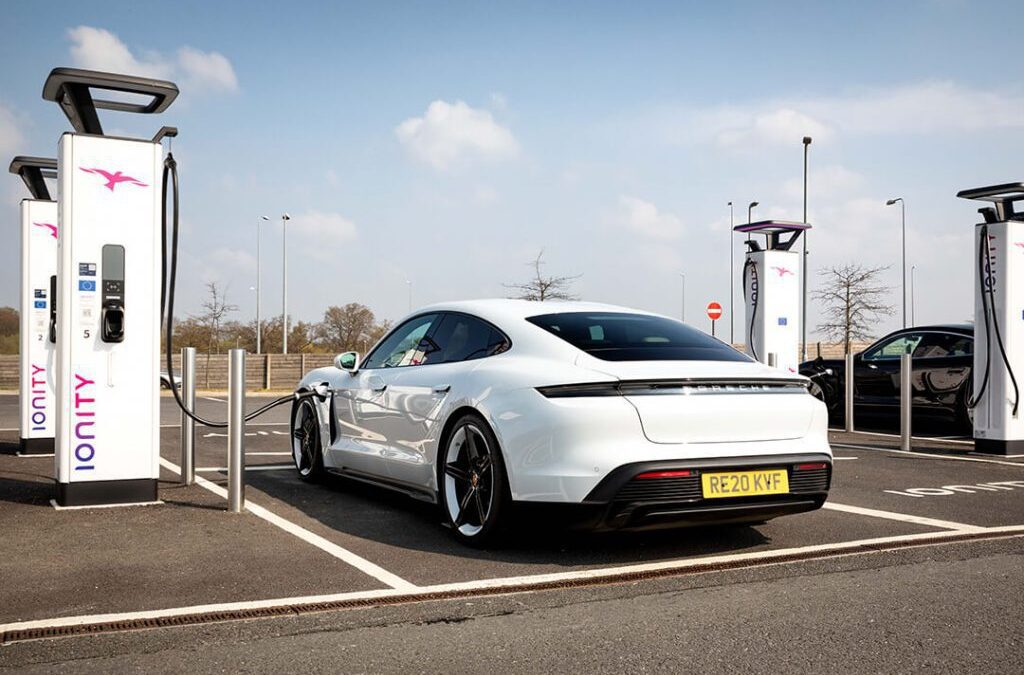 With climate change at the top of everybody’s minds now, I thought that I would share some behind the scenes of a recent PR photography shoot.

A PR agency commissioned me to conduct a PR photography shoot for Ionity, a company that operates high powered electric vehicle charging stations.

IONITY is a joint venture of BMW Ford, Hyundai, Mercedes Benz AG and Volkswagen Group with Audi and Porsche. Their goal is to build a high-power charging network for electric vehicles along major highways in Europe with plans for up to 400 sites.

Their stations can charge at 350 kW which means at maximum capacity, the charge can be completed in around 15 – 20 minutes. They also automatically sense the power capacity of the car, so if you are not lucky to own a prestige car your car will still be charged at its optimum rate.

The brief and shoot.

This shoot was organised in conjunction with Porsche. They had arranged for a film crew to video one of their Tayan cars at Cobham services, near to where I live.

The brief was to capture stills once the film crew had finished their first takes. This meant a reasonable amount of waiting around. It did give me the opportunity to be a little more creative with my photography. It helped that I had a prestigious subject at my disposal.

They wanted some interesting angles and if possible, some action shots too. I decided to take some shots of the car being driven around and arriving at the charging station.

The advantage of working alongside a film crew is that they usually use multiple takes to cover every angle. This gives me more opportunities to get the shots I need.

I did ask if I could borrow the model so that I could get some shots with her using the equipment to bring some extra interest. The answer was obvious because the model politely declined as she had been contracted by Porsche for the day. The moral here is if you do not ask you will never get.

I do have a reputation for being cheeky occasionally, as I like to capture something different. Examples include the local mayor on a Segway and our local MP sporting a stainless-steel bra.

This gave me an advantage as the sample shots sent were of rather more mundane vehicles and the sun was shining too. 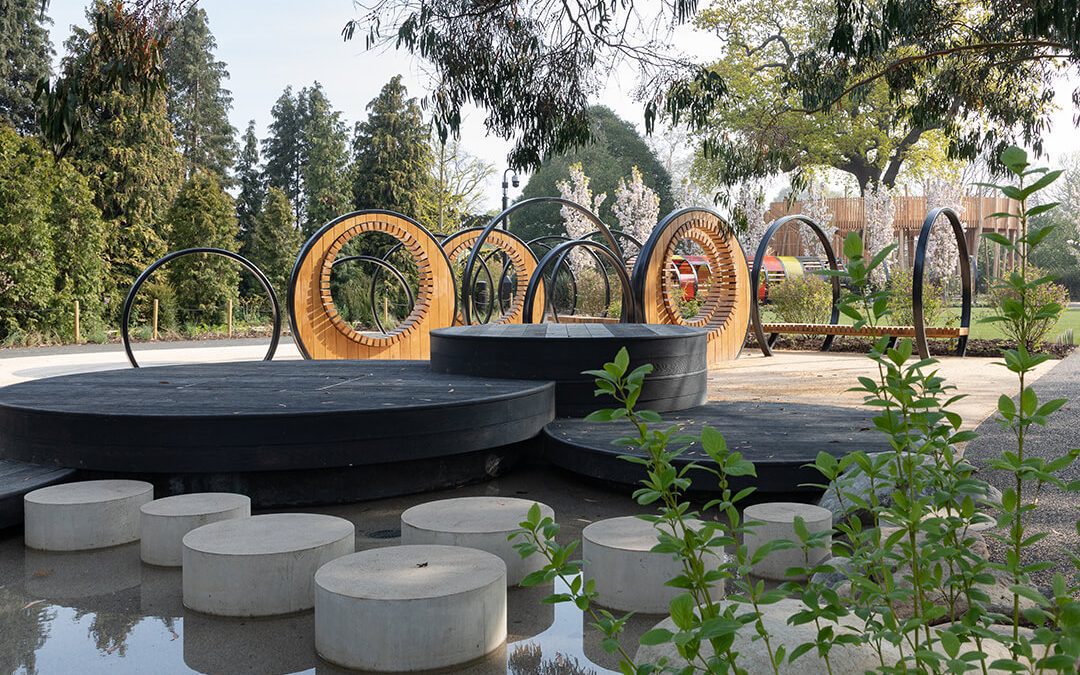 The marketing mix has definitely changed over the years. Never more so in the latest crisis. There is increasing emphasis on online content and social media awareness.

This makes it so important that you make the best use of your marketing and PR photography.

The immediacy of modern platforms and the sheer quantity of data being put out there means that your post can disappear in moments.

The key to success is consistency and regular posting. This means that there is a continuing requirement for PR and marketing photography.

There are a number of ways to achieve this…

You could enlist the services of a professional, who will give you the right quality of image to make your business stand out. Another is to keep things in house, although this may compromise things somewhat as quality and consistency may vary.

To mitigate this you can train the operatives and give them exact criteria and briefs. Of course, photography training is another service that I provide and I have recently run one to one sessions for an estate agency and a catering organisation.

For more information about 121 training please visit my tuition page.

As it is now the right time to think about and book this type of shoot, I thought that I would showcase a case study to highlight where I can help.

I was contacted by the designers and installers of the new childrens garden at Kew Gardens. They required publicity shots of their big reveal to the families of people who work at Kew Gardens.

The benefit for me to receive a fully detailed brief for PR and marketing photography is that I have a reference point to work to. This means that I will capture all of the shots required by the client. The brief given was to capture publicity shots of the newly designed and built childrens garden.

They wanted an overview of the gardens before the official opening and also required images capturing the children enjoying the garden. This was for their website, social media and PR. My point of liaison was the marketing manager.

The garden was designed to be a fun interactive space to encourage children to climb, run, jump and explore. It was based around 4 zones featuring the things needed to thrive and grow – earth, air, sun and water.

The central feature of the garden is a 4m high canopy walk around a 200 year old oak tree. There is also a bamboo tunnel and a water feature that represents a stream, including water pumps and dam gates that open. 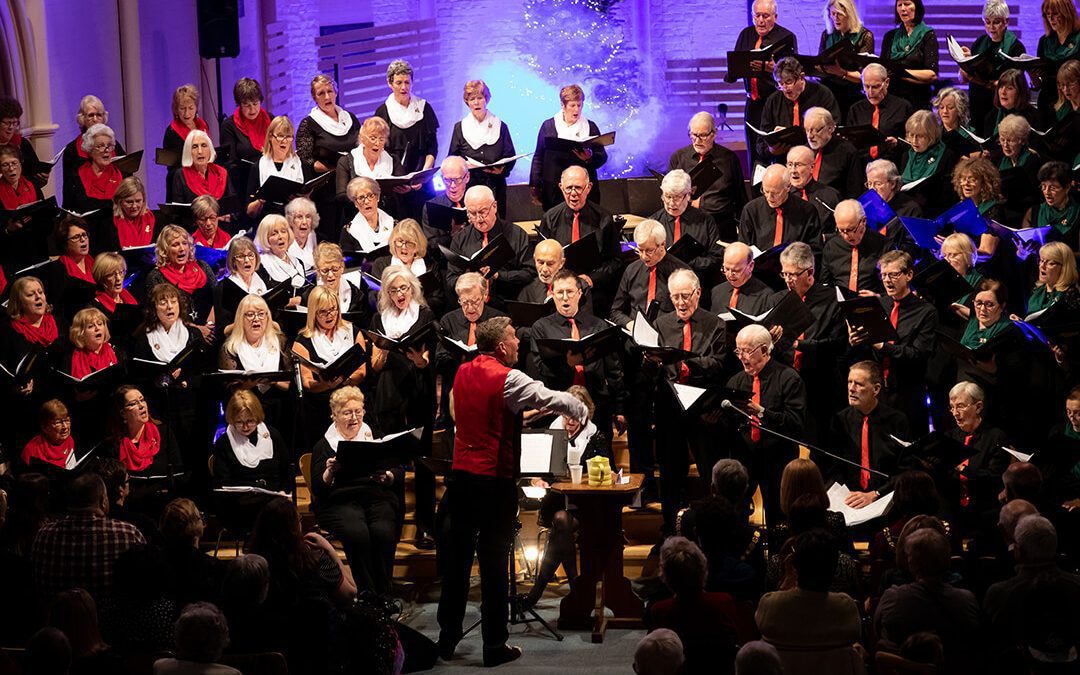 I was recently given the privilege to undertake some Christmas concert photography covering the annual concert for the two Elmbridge choirs.

This was a spectacular event that took place in Christ Church in Woking. The two Elmbridge choirs are very well known in my home area.

The evening boasted a full house of 300 who enjoyed seasonal music from the superb 90-voice Elmbridge Ladies Choir and the marvellously entertaining 130-strong Elmbridge Choir, led by Cliff van Tonder – Founder and CEO of Surrey Music.

Surrey Music was founded in 2005. The founder’s drive, ambition and exuberance are well recognised, not only to the members of Surrey Music but to the local community as a whole. Over the years more than £175,000 has been raised for charitable causes and many hundreds of people have benefited from his commitment. Cliff has recently been honoured with a British Citizen Award for services to the Arts.

Chase Adams is an up and coming singer/songwriter who hails from Brighton. Chase has been performing for around 12 years and lists his influences as Bruno Mars, Adam Lambert, Maroon 5 and Ed Sheeran. Elite Elton is the UK’s premier Elton John tribute act. Kevin Clay (‘Elton’) is a very close lookalike who performs a huge repertoire of Sir Elton John’s songs. He took to the stage in typically flamboyant fashion and at the end had everyone on their feet for Crocodile Rock.

The concert was opened by Chase Adams who gave a very soulful performance, delighting the audience with his superb voice. Following this was the spectacular entrance of the 90 strong Elmbridge Ladies Choir to the tune of ‘Here Come The Girls’, led by their Musical Director Christine Parker. Their repertoire included a varied programme, from traditional carols to an African lullaby with percussion accompaniment.

It was then the turn of Kevin Clay and his alter-persona of Elite Elton. His entrance was even more spectacular as he was wearing a sequined jacket and topped with a straw boater. On stage there was a baby grand piano surrounded by the choir. He performed the majority of Sir Elton John’s best-known songs of which there are many and returned later as an older Elton with a sparkly purple shirt.

The highlight of the evening was the 130 strong Elmbridge mixed choir. Their repertoire included traditional carols and some songs featured in Frozen and The Greatest Showman. Cliff van Tonder was absolutely mesmerising as their conductor and knew how to get the best out of all the performers.

The evening turned out to be particularly brilliant and it was a total pleasure to be involved in the Christmas concert photography for both of the choirs. 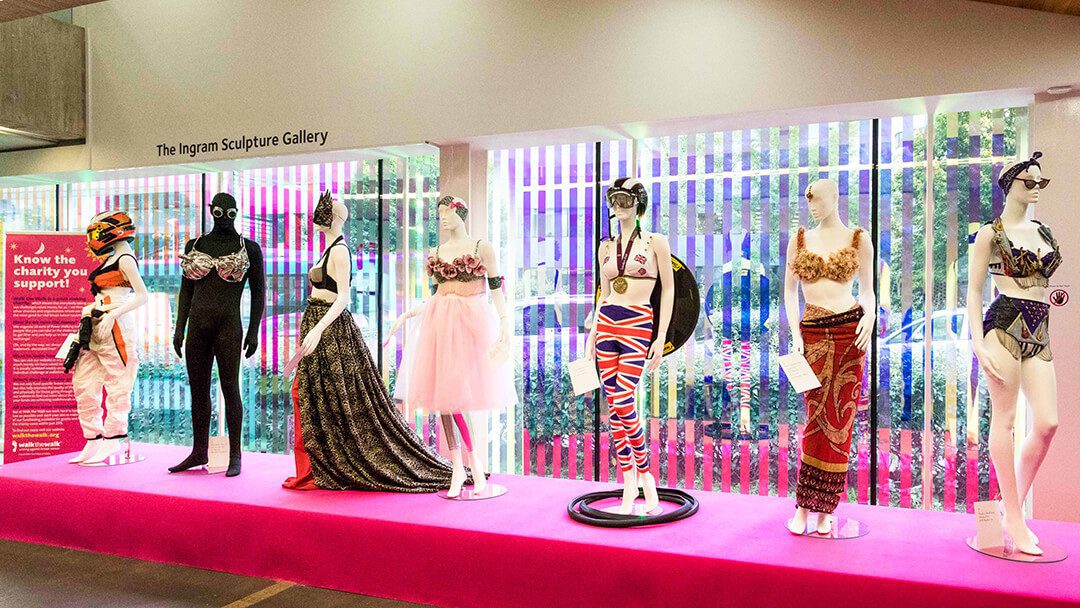 What I really love about my job is its unpredictability, especially when it comes to events photography. This time I was asked to cover the launch event for the ‘Bust Up’ exhibition at The Lightbox in Woking. The event was organised for the breast cancer charity ‘Walk the Walk’. This charity is well known for organising the world-famous moonwalks. Participants power walk at least a half marathon through capital cities whilst wearing decorated bras. All to raise money for research into causes of breast cancer.

Walk the Walk felt that it should do something quite special to celebrate it’s 21st birthday, so decided to stage an exhibition at the iconic Lightbox in Woking. The Lightbox is an art gallery and museum dubbed one of the most exciting spaces of its kind in the South East. The Lightbox opened in 2007 and was designed by architects Marks Barfield. They were also responsible for the London Eye. It is a very striking building lying between the main Victoria Way and the Basingstoke Canal. In 2008 the Lightbox won the arts fund museum of the year and in 2016 was awarded a green tourism silver award.

Nina Barough CBE founded ‘Walk the Walk’ in 1996 from a desk in the Playtex offices in Woking. The idea was originally to power walk the New York City marathon in bras as a one off event to raise money for breast cancer.  The Walk the Walk charity is based in Woking, hence the exhibition being held in the town. Ironically, following the success of the idea, Nina herself was diagnosed with the disease. Following a lot of treatment and surgery Nina has gone from strength to strength and has led the charity in raising more than £121 million over the years.

Walk the Walk felt that it would be most fitting to exhibit some of their trademark decorated bras in the exhibition.

There are seven bras in total and each have a direct connection to Woking.